Over the past three years, the government has focused more on maintaining sanitation and cleanliness standards, and ensuring an open defecation-free society. To this end, the centre has implemented the Swachh Bharat Mission with the help of civic participation and awareness campaigns. Meanwhile, with the simultaneous effort to adopt technology for urban governance, the Ministry of Urban Development (MoUD) launched the Swachhata-MoUD mobile application in August 2016.

The Swachhata-MoUD application represents a quantum leap in the process of grievance redressal by municipal corporations in India. The platform, which has both mobile and web-based components, is an efficient and accountable method for citizens to lodge complaints, highlight civic issues to municipal authorities and work together as a community towards better sanitation.

The application is centred on addressing grievances of citizens on matters of public cleanliness, sanitation and hygiene. It allows users to post complaints regarding civic issues such as dustbins not being cleaned, garbage dumps, garbage vehicles not arriving, sweeping not being done, blockages in public toilets, no electricity and/or water supply in public toilets, and dirty toilets.

In addition, users can register complaints by uploading a photograph of the concerned issue, which is automatically geotagged. The authorities can therefore come up with a faster resolution by identifying the location. Once the complaint is lodged it is forwarded to the concerned municipal corporation and is thereafter assigned to the sanitary inspector of the respective wards.

In order to ensure timely redressal of complaints by the respective civic agencies, a 12-hour timeline (or service-level agreement) has been assigned. Further, the civic agencies have to initiate an action on a complaint within six hours of registration of the issue on the application.

The mobile application also allows the users to review the status of their complaint and provides them with alerts regarding changes in the status via push notifications. Users can also mark their complaint as resolved and edit or delete the issue. Once the issue is addressed, the assigned sanitary inspector/engineer uploads a resolved image of the grievance and alerts the complainant about the same. After the problem is resolved, the application allows users to give their feedback on the quality of resolution. If they are not satisfied with the action taken by the authorities, the users can reopen the complaint.

The mobile application has been made available for both Android as well as iOS operating systems in eight languages – English, Hindi, Marathi, Bengali, Kannada, Malayalam, Tamil and Telugu. This will help ensure deeper penetration of the application and a higher rate of public participation. It has been developed by I Change My City – a division of Janaagraha Centre for Citizenship and Democracy, a Bengaluru based non-profit organisation.

In addition to this, the MoUD has launched a website to enable civic agencies and their digital teams to monitor the status of complaints received in their cities and towns through the mobile application.

The interface of the application is highly interactive, which encourages the users to participate in the civic process. It not only allows them to

create their own profiles and register complaints, but also gives them an informative feed regarding the issues highlighted by other users in their city. Therefore, users can identify the common civic issues in their vicinity. To highlight such problems to the municipal authorities, users can also “vote up” the complaints lodged by other users, comment on the post and share it through the mobile application for higher visibility.

The Swachhata-MoUD mobile application also provides the users with information regarding Swachh Survekshan – an annual national ranking survey of cities on urban sanitation. It evaluates the cities on five key parameters: waste collection, sweeping and transportation; municipal solid waste processing and disposal; status of open defecation and toilets; information, education and behavioural changes; and capacity building through the Swachh Bharat Mission e-Learning portal. The survey relies on information provided by the civic agencies, independent assessments and citizen feedback. The MoUD has mandated the Quality Council of India, an autonomous government body, to conduct the survey.

In addition to the application for availing of information regarding the ranking of various cities and their scores, the ministry has launched an online citizen dashboard (www.swachh.city) for the same. The dashboard provides the rating of the cities based on their complaint resolution rates. It also scrutinises the ward-wise performance of the city.

Therefore, the scoring system for cities strives to inculcate a sense of competition among municipal corporations across the country. Further, citizen feedback and transparency of scores instil accountability among the civic authorities for faster and effective grievance redressal.

As of January 16, 2017, a total of 1,090 cities have participated and engaged with citizen groups through urban local bodies (ULBs), educational institutes, and NGOs to spread the word about the Swachhata-MoUD application. The application has 645,656 registered users across the country and has received 276,416 complaints. Of the total issues registered, the municipal authorities have successfully resolved 243,047 issues (about 88 per cent).

While the grievance redressal rate indicates that the municipal authorities are undertaking measures for fast and effective resolution of issues, the application still needs an expanded user base. Given that it caters to all citizens across India’s urban centres, the number of downloads of the mobile application has the potential to increase significantly.

The MoUD has created a new wave of digital governance with the Swachhata-MoUD mobile application. It not only provides an effective platform for addressing sanitation and cleanliness issues, but also instils a sense of community-level participation. Further, the integration of Swachh Survekshan with the mobile application has increased the level of competitiveness amongst ULBs. Municipalities are now striving to improve their sanitation conditions in a bid to improve their ranking under the survey. However, the key to the success of such  mobile applications is large-scale citizen participation. Therefore, the ministry needs to take measures to popularise the application among the country’s urban citizens. If used to its full potential, the application can bring us one step closer to meeting the objectives of the Swachh Bharat Mission. 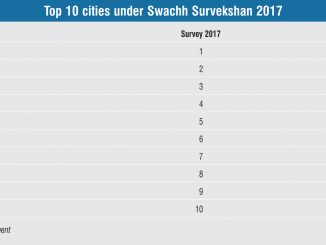