The country has set ambitious smart metering targets but its progress on the ground has been slow. The central government has launched various schemes to increase smart metering, but problems like high cost of implementation, lack of expertise among discoms, and data integration and interoperability have hampered project implementation. That said, the recent installation of 50,000 smart meters in the New Delhi Municipal Council (NDMC) areas by Energy Efficiency Services Limited (EESL) has given confidence to the industry. Also, the need to reduce high aggregate technical and commercial (AT&C) losses, improve revenue collection and provide better consumer services will continue to drive smart metering. Also, given the size of the Indian market (nearly 23 million smart meters are planned to be installed under the Ujwal Discom Assurance Yojana [UDAY] alone), international players have shown interest in this space. A case in point is French utility EDF, which recently secured a Euro 66 million contract from EESL to roll out 5 million smart meters in Bihar and Andhra Pradesh in a consortium with Accenture Solutions Private Limited.

Multilateral institutions such as the Asian Development Bank (ADB) are assisting in smart metering projects in the country. For instance, ADB has provided a $200 million loan to EESL to implement various demand-side energy efficiency projects in India. These funds have been used to install smart meters based on satellite technology in 5,000 rural households in Varanasi. Recently, large tenders have been launched for smart meter installation in states such as Uttar Pradesh. An update on the key trends and developments in the smart metering segment…

The biggest growth driver for smart metering is the need to reduce AT&C losses, which currently stand at 19 per cent for states under UDAY. These losses can be attributed to power theft and meter tampering, which adversely impact discom revenue. Smart meters detect irregularities in power consumption and notify the utility. Smart meters can play a key role in improving the financial health of distribution utilities.

One of the first smart metering initiatives by the central government was launched in 2012, when the Ministry of Power (MoP) sanctioned 11 smart grid pilot projects with 50 per cent funding. Four of these projects have been completed, one has been cancelled and the rest are under implementation. Advanced metering infrastructure (AMI) is one of the key functionalities covered in all of these projects. Under these MoP-funded smart grid pilot projects, 172,000 smart meters have been sanctioned, of which over 132,000 smart meters have already been installed.

Under the Integrated Power Development Scheme (IPDS), launched in 2014, the central government approved a cost of Rs 8.34 billion, including nearly 60 per cent government grant. However, the disbursements stood at nil as of May 2019.

In August 2015, the Bureau of Indian Standards issued the national standards for smart meters and modified them in 2017 based on feedback from stakeholders. In August 2016, the Central Electricity Authority (CEA) published the functional requirements of AMI and the technical specifications of smart meters. In September 2016, it came up with a strategy for rolling out smart meters. Further, the National Tariff Policy (amended in January 2016) and UDAY (launched in 2015) mandate the deployment of smart meters for all consumers with a consumption of more than 200 units per month. As of May 2019, only about 3.7 per cent of the targeted 5.7 million smart meters have been installed for consumers with a monthly consumption of over 500 kWh. For consumers in the 200-500 kWh category, smart meter deployment is even more dismal with only 1.87 per cent of the targeted 18.4 million smart meters installed so far.

In December 2018, the power ministry directed states to completely switch to smart prepaid meters in three years starting from April 2019. Accordingly, in February 2019, the states were asked to draft smart meter implementation plans with a procurement strategy. The discoms can go for stand-alone procurement or use services of aggregators like EESL for the roll-out of smart meters.

EESL is playing a crucial role in increasing the adoption of smart meters by acting as an aggregator of demand from states and placing bulk orders for meter procurement, resulting in cost efficiencies. The utility aims to replace 250 million conventional meters with smart meters by 2027 under the Smart Meter National Programme. Through mass delpoyment of smart meters, it aims to reduce AT&C losses to below 12 per cent by 2022 and below 10 per cent by 2027. To this end, EESL launched a mega tender to procure 5 million smart meters in July 2017 on behalf of the Uttar Pradesh and Haryana utilities for implementing smart grid projects in these states. The smart meters are planned to be installed over a period of three years in Uttar Pradesh (4 million) and Haryana (1 million). ITI Limited emerged as the lowest bidder in the auction, procuring smart meters at a cost of Rs 2,500 per meter with a total capex of Rs 30 billion.

In April 2019, EESL selected EDF for the design, installation and integration of a network of 5 million smart meters in Andhra Pradesh and Bihar by 2020. This contract has been jointly awarded to EDF International Networks in a consortium with Accenture Solutions Private Limited (India) with a shareholding of 95 per cent and 5 per cent respectively. 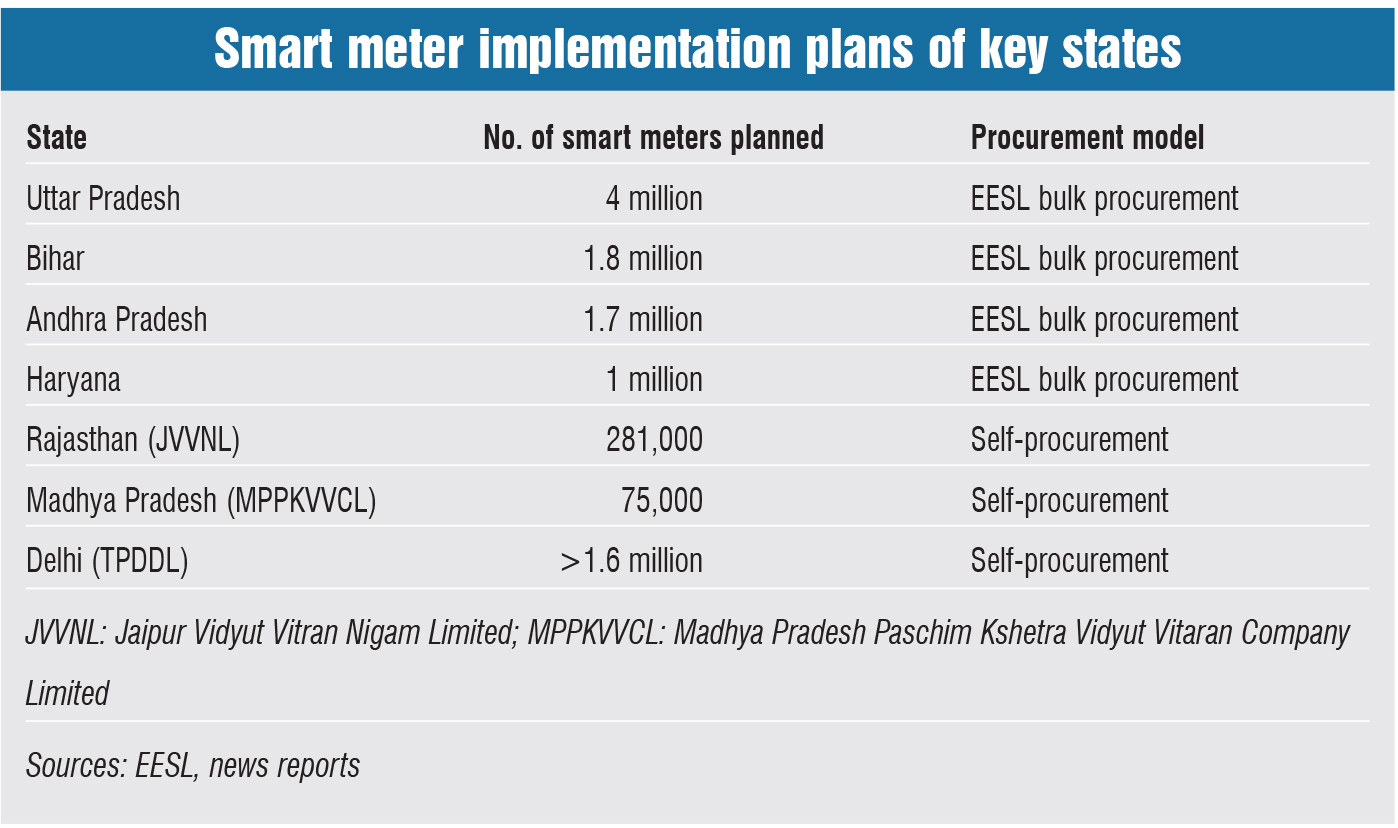 Challenges and the way forward

One of the biggest challenges associated with smart meters is their high cost. As per estimates, the average cost (including infrastructure and software) of a smart meter is Rs 4,000-Rs 6,000. Given the weak financial health of discoms, arranging funds for smart meters is a challenge. While government grants under schemes like the IPDS are helpful, they can only go so far. EESL’s model of bulk procurement, demand aggregation and savings monetisation seems promising. EESL has been able to achieve a 20 per cent reduction in smart meter cost through this approach. Another challenge in smart metering is the limited number of smart meter manufacturers. In addition, there are only a small number of certified testing laboratories for smart meters. There is also a need for an adequate cybersecurity and technological infrastructure.

So far, government efforts have given a push to smart metering and the latest directive to replace all existing meters with smart prepaid ones further shows the government’s resolve to meet its smart metering targets. An enabling environment is needed along with appropriate standards, and adequate manufacturing capacity, testing facilities and manpower training. State utilities also need to roll up their sleeves and work in mission mode to achieve the targets. To conclude, smart metering is the need of the hour and provides benefits for all stakeholders in the power value chain and should, therefore, be implemented expeditiously.