According to a NITI Aayog report, Delhi is among the 21 major cities that will run out of groundwater by 2020. Another study by the National Geophysical Research Institute (NGRI) states that groundwater levels in Delhi are depleting at an alarming rate of 10 cm per year. Like every summer, this time too Delhi faced a severe water shortage due to depleting groundwater and contamination of waterbodies. The only two solutions to solve this perpetual water crisis are wastewater recycling and groundwater recharge. The rising urban population, both on account of migration from rural areas as well as the urbanisation of rural settlements, has made it all the more important to take serious measures in this regard. This rapid urbanisation has led to a significant increase in the demand for civic services, which include managing urban water resources and liquid waste. And this demand already far outstrips the available service capacity. Over the past three to four years, the government has paid greater attention to improving sewage management practices, especially in urban areas. As a result, the sewerage sector has witnessed a surge in activity in terms of the launch of new programmes and schemes, and project uptake based on advanced treatment technologies.

The setting up of the country’s largest sewage treatment plant (STP) at Okhla is one such step taken by the Delhi Jal Board (DJB) towards recycling and reusing wastewater, and minimising the use of groundwater for non-potable purposes. As per a Central Pollution Control Board (CPCB) report, prepared with data from December 16, 2018 to January 28, 2019, Delhi has 41 STPs, of which 33 are operational. However, almost 16 of the 33 STPs do not meet the treated sewage quality discharge standards. However, the Okhla STP will be a state-of-the-art, fully automated plant with SCADA. It will treat sewage as per stringent effluent parameters of biological oxygen demand (BOD) and total suspended solids (TSS) less than 10 milligram per litre (mg per litre) as well as help in nitrogen and phosphorus removal, and disinfection in order to improve the quality of water in the river Yamuna. It will cost Rs 11.61 billion and have a capacity to treat 564 million litres per day (mld). The plant is being constructed as part of the Yamuna Action Plan Phase III for which 85 per cent funds are being provided by the central government out of the loan received from the Japan International Cooperation Agency (JICA) and the remaining 15 per cent by the Delhi government. It is a part of the Namami Gange initiative. The work was awarded to the Suez Group in May 2019 and is expected to be completed by 2022. The contract also includes the operations and maintenance of the plant for a period of 10 years after one year of the defect liability period. This will be the largest wastewater treatment plant in India and one of the biggest in the world.

The Okhla STP will be an integrated plant that will not only treat sewage but will also have a complete sludge management facility so that the sludge generated at the plant can be handled in an environment-friendly manner. Sludge management has also been included in the scope of the work of this project. The project is expected to significantly improve the quality of water of the river Yamuna, as it will remove 41,200 kg per day of organic pollutant load and 61,600 kg per day of solid load from the river.  The plant will have the largest ultraviolet (UV) disinfectant system in the country for the removal of feacal coliform from water. At present, most STPs in Delhi and the rest of the country use chlorine for this purpose. However, the use of chlorine does not clean the treated water well enough to support the flora and fauna in the waterbody receiving it. It will cater to around 4 million citizens residing in Chandni Chowk, Kashmere Gate, Daryaganj, the New Delhi Municipal Council areas, Lodhi Colony, Nizamuddin, Okhla, Badarpur, Kalkaji, Malviya Nagar, Katwaria Sarai, Lajpat Nagar, Greater Kailash, and the Munirka-Badarpur stretch in South Delhi.

The Okhla sewage treatment complex comprises six existing STPs – Phase I (136 mld), Phase II (55 mld), Phases III (205 mld), Phase IV (168 mld), Phases V (73 mld) and Phase VI (136 mld). The existing Phases I, II, III and IV STPs were constructed in the years 1937, 1982, 1991 and 1993, respectively, with effluent parameters of BOD less than 30 mg per litre and TSS less than 50 mg per litre. Since these old plants have outlived their useful life, they will be replaced with a new combined capacity of Phase I, II, III and IV (564 mld), which will be set up as part of this new STP at Okhla. There will not be any disruption in the operations of the existing treatment plants during the construction of the new STP as the new combined capacity will be constructed on vacant land. 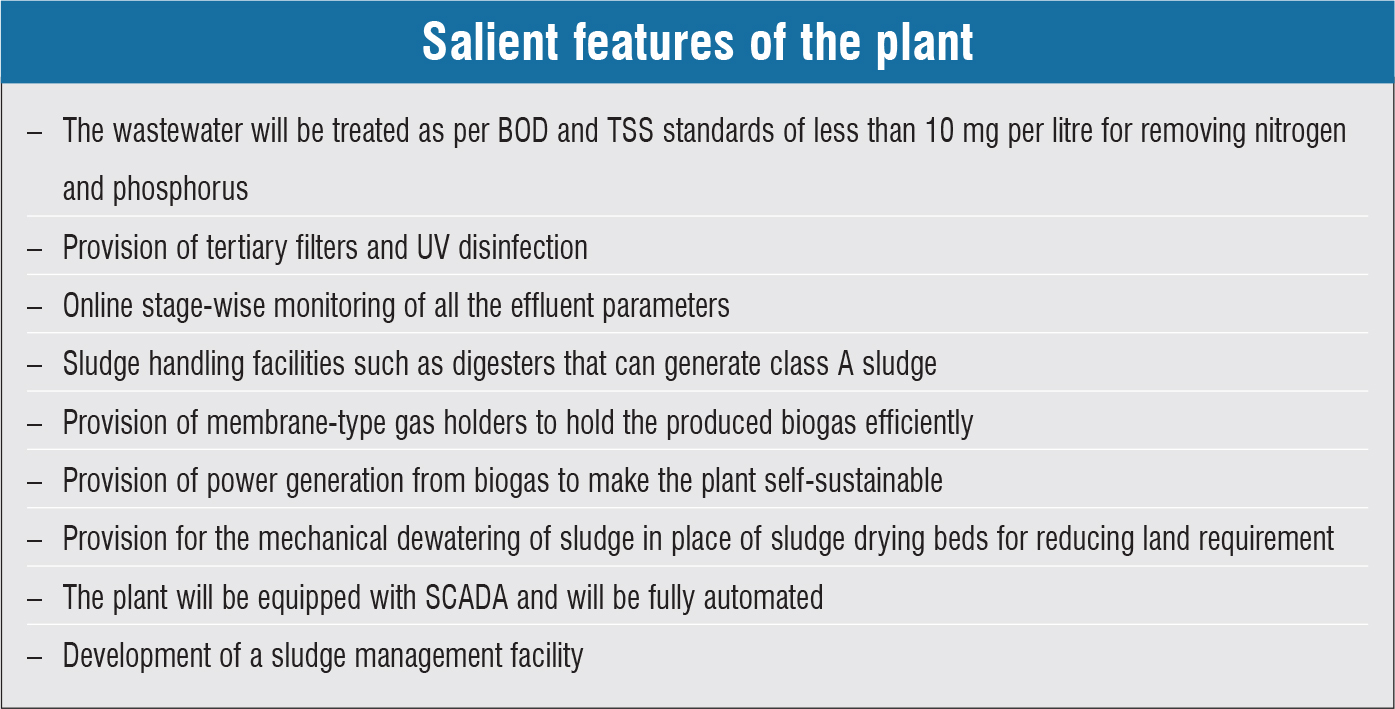 Other measures taken by DJB

The DJB has undertaken several initiatives for improving water supply, cleaning the river Yamuna, recharging groundwater and rejuvenating the existing waterbodies. It recently approved the construction of a drinking water treatment plant (WTP) in Chandrawal at a cost of Rs 5.98 billion. The WTP will be based on the advanced technology of ozonation and activated carbon to ensure un-interrupted working of the plant. The project is funded by the JICA scheme and is expected to be completed within three years. This will resolve the issue of frequent stoppage of the WTP due to ammonia discharge by Haryana. The DJB has further accorded approval to the construction of a water museum, which will disseminate information on water, wastewater, rainwater, the historical connection of Delhi with the river Yamuna, and its transition from a water utility to a comprehensive solution provider in the changing scenario. In September 2018, the Local Treatment of Urban Sewage Streams for Healthy Reuse (LOTUSHR) project was inaugurated at the Sun Dial Park in New Delhi. The facility produces clean water, which is reused for various purposes, while simultaneously restoring nutrients and energy from urban wastewater. The project is a joint initiative of Indian and Dutch scientists. In 2017, the Department of Biotechnology, in consultation with the Delhi Development Authority, identified the Barapullah drain at Sarai Kale Khan for setting up an on-site experimental testing laboratory and a pilot plant.

However, the successful and timely completion of these projects will eventually depend on project structuring, political support, credible and updated data systems, revenue streams and the financial health of urban local bodies. Unless all the stakeholders come together to put in equal efforts, it is going to be a long recovery process.