Indian cities are grappling with acute water shortage due to the fast depleting water reserves and lower groundwater levels. Wastewater (brackish water) generation and management is another major issue currently plaguing the cities. However, water demand from households and industries is on the rise. In this scenario, solutions for using seawater are being explored to meet the growing requirements. The governments of Tamil Nadu and Gujarat, among other states, are already emphasising the need for innovative desalination technologies in seawater processing.

Techniques such as reverse osmosis using membranes are already prevalent in India with the Minjur and Nemmeli desalination plants currently working on this technology. Apart from this, thermal processes involving multistage or multiple-effect distillation are now gaining prominence in the industrial segment. Other promising desalination technologies such as electrodialysis, forward osmosis and membrane distillation are also being explored to develop large-scale desalination plants in the country. However, challenges relating to discharge of brine from plants, high cost of plant development and high energy consumption need to be addressed to create a favourable market for desalination plants.

The two most commonly used desalination technologies are membrane-based technology and thermal desalination. These are deployed in different types of plants based on their size.

Membrane technology: In this technology, water is cold-pressed through a semi-permeable membrane under high pressure. As a result, it leaves the high concentration side of the membrane and flows into the desalted zone. Further, based on the purpose of desalination (for drinking or for treating brackish water), different types of membranes are used. For instance, for wastewater treatment, membrane bioreactors are highly relevant, whereas for seawater desalination processes reverse osmosis membranes and nanofiltration can be used. These membranes have been segmented based on their pore sizes.

Multistage flash desalination: This method of thermal distillation involves flash evaporation of water, which is repeated in successive stages (15-36) at lower pressures. With this, the water vapour is condensed on an outside tube, which is then cooled using seawater. It is commercially competitive for very large-sized plants, especially when free steam is available.

Multi-effect desalination (MED): This technique involves film boiling for generation of vapour, that too in successive stages and at lower pressures (typically Stages VI-VIII). However, unlike multistage flash desalination, water vapour is condensed inside the tubes and is cooled by seawater, which is sprayed outside the tube. This process involves low capital cost and ensures higher efficiency compared to multistage flash desalination. It can be used for dual-purpose plants (producing both water and electricity) and is commercially competitive for small- to medium-sized thermal power plants.

Membrane technology is widely used in India as it is about 23 per cent cheaper than thermal technology, and is suitable for decentralised plants. It is commercially competitive for all plant sizes and has modular design with quick start-up and shutdown functionalities. The process has been made competitive mainly with the development of high energy recovery devices and use of low pressure membranes that consume less energy. It is the more mature technology with about 85 per cent of desalination plants in India being membrane based.

Thermal desalination technology is still emerging. It involves higher energy consumption and costs than membrane processes. Globally, thermal technology caters to most of the processed drinking, irrigation and other water needs of countries.

Electrodialysis is another technology for desalination of seawater. It involves electrochemical separation, under which ions (present in water) are transferred through ion exchange membranes by passing direct current voltage. Through this process, an electrical driving force is applied to transfer positively charged ions from the source water (seawater) through cathode, and the negatively charged ions through anode to a concentrated wastewater stream, thereby creating a more diluted stream of water. Another technique, electrodialysis reversal, has been introduced. It is an advancement of the electrodialysis process and uses the electrode polarity reversal process to automatically clean membrane surfaces. Other promising technologies being explored are forward osmosis, membrane distillation, capacitive deionisation, humidification-dehumidification and new reverse osmosis membranes. Considering the high cost involved in developing desalination plants, advanced technologies such as ultrafiltration membrane, electrochemical desalination modules and solar-power-based desalination are also being tested to reduce the cost. Further, superior equipment, such as variable frequency drives, is being deployed to reduce energy consumption. 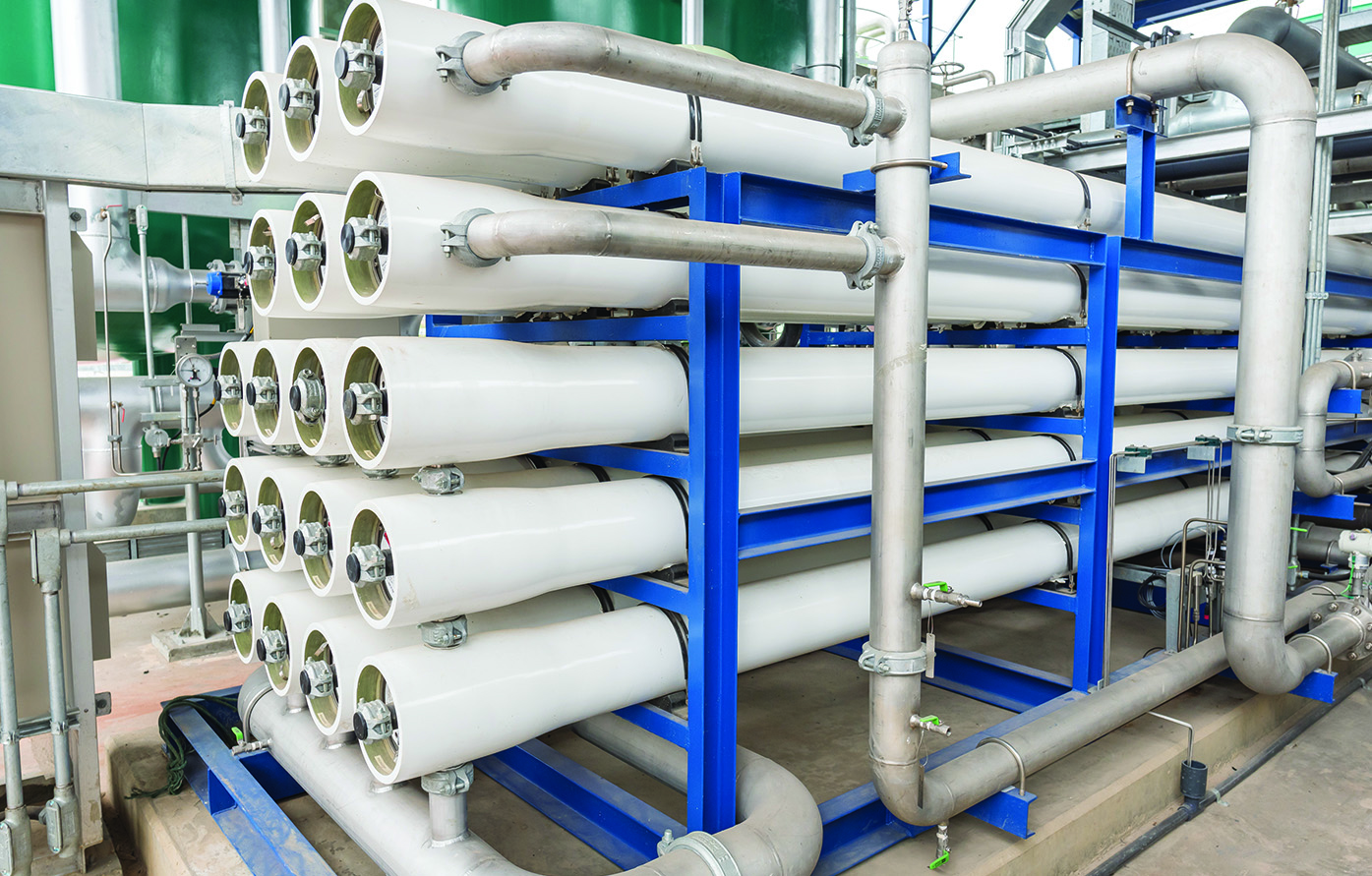 Conclusion and the way forward

Desalination plants are yet to fully take off, as only a handful of plants are operational at present. India, with a coastline of about 7,500 km, offers huge potential for the implementation of desalination plants. It is currently one of the promising methods for ensuring clean water supply, given the existing water scarcity. However, for its greater deployment, challenges with respect to import of membranes, high capex and opex involved in development and lack of energy efficient technologies need to be addressed.

A higher energy consumption for desalination results in higher carbon emissions. Thus, there is a need to develop green desalination plants, which depend on renewable energy sources (either grid connected or off-grid), to ensure energy and cost efficiencies. Another critical issue is brine, the primary by-product of desalination, which contains chemicals and suspended particles. The by-product, high in salt content, is discharged into waterbodies, disturbing the ecosystem and reducing oxygen levels. Minerals such as salt, chlorine and calcium that are present in brine can be recovered for reuse elsewhere. Therefore, this has to be treated for its safe disposal.

From the developer point of view, technological improvements in membrane design such as the use of nano-engineered membrane, carbon nanotube membrane and aquaporin membrane will help in saving energy costs. These can be tested on a pilot scale initially. With these measures in place, desalination is soon expected to become a big market for developers.