Digital monitoring of assets in the distribution network is essentially the first step for improving discoms’ performance. Technology intervention can significantly help reduce high aggregate technical and commercial (AT&C) losses and deliver quality power to consumers. Further, for the optimum utilisation of the installed distribution infrastructure under various central and state government schemes, it is essential to digitally map the existing discom network. In this background, the Central Electricity Authority (CEA) has released guidelines for a draft universal feeder code to map the electricity supply infrastructure of discoms. The objective of the universal feeder code is to provide a unique identity to feeders not only at the discom and state level but also at the national level. The code will provide details regarding the physical location of a feeder, the type of area that it serves, as well as the originating power substation, in a systematic manner.

At present, only a few discoms like the the Mangalore Electricity Supply Company (MESCOM), BSES Yamuna Power Limited (BYPL) and West Bengal Electricity Distribution Company Limited (WBSEDCL) have feeder codes. MESCOM has a four-character alphanumeric code, WBSEDCL has a four-character code for outgoing 11 kV feeders and five-character code for incoming 11 kV feeders, and BYPL has adopted a 16-character 11 kV feeder coding scheme. As discoms have formulated these codes themselves in the absence of universal coding standards, there are significant variations in these codes. As a result, it is nearly impossible to import feeder data on a single platform like the National Power Portal to monitor the operational parameters of multiple discoms. In addition, many of the existing codes are not systematic and cannot be used to identify the physical location of feeders as well as the areas (rural/urban) served by the feeders. 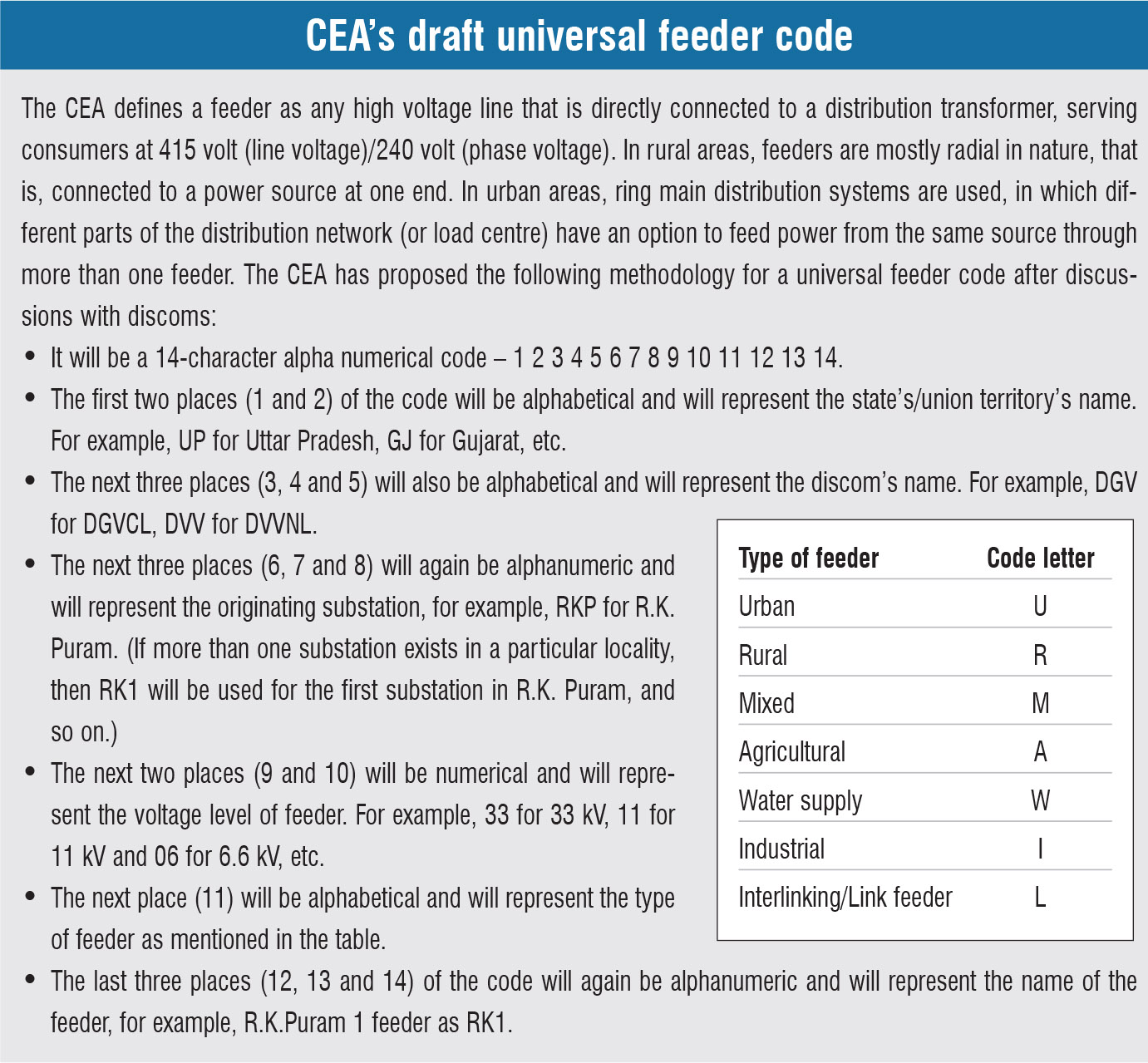 The CEA has proposed a 14-character alphanumeric code, with each character representing different details such as the state’s name, discom, originating substation, voltage level as well as type (see box for details). Certain operational issues are expected during the switchover from the existing coding system to the new one but the universal feeder code will benefit discoms and the power sector in the long run.

A universal feeder code would help direct the central government’s investment in the distribution segment in a more efficient manner, as assessed through a centralised database of the network infrastructure. It will facilitate the monitoring of operational parameters such as AT&C losses at the feeder level. This will enable discoms to undertake targeted loss reduction measures in specific areas. The systematic accounting of feeders through the universal code will also facilitate the separation of carriage and content in the distribution segment in the future. In addition, it will open up the opportunity for implementing availability-based tariffs and harmonise the existing multiple feeder coding systems followed by different discoms.

Going forward, as automation in the distribution segment increases and discoms gear up to implement smart grid projects, it is imperative to introduce universal coding for feeders as well as other distribution assets. Digital mapping of distribution infrastructure will go a long way in making discoms accountable and improving their performance.