Recognising the need for an efficient service delivery system to support the expansion of smart facilities across the city, the Bhubaneswar Municipal Corporation (BMC) has been actively undertaking a number of IT-related initiatives. The utility has established a dedicated project management unit (IT-PMU) for developing an integrated e-governance framework by leveraging information and communication technology. IT-PMU is aimed at streamlining, improving and strengthening the functioning of BMC.

One of its recent initiatives has been the establishment of a robust and reliable grievance redressal mechanism. As part of this, a website, BMC Sampark, and two mobile applications – My City My Pride and BMC M-office – have been launched. The grievance redressal process is carried out through a single-window centralised system, which enables faster and more effective service delivery.

To begin with, BMC has established a 24×7 call centre to address the complaints of consumers without internet access. After they are registered at the call centre, these complaints are processed, translated and fed into a computer, where the built-in intelligent system automatically tracks and pursues their status with the concerned authority. This ensures that registered complaints are addressed and issues resolved within the stipulated time frames.

The call centre provides a complaint ticket number upon the successful registration of a complaint, which is subsequently forwarded to the concerned officer through an SMS. To close a particular complaint, the official is required to update the database either through SMS, email or a web response. The complaint must be resolved within the stipulated time frame. After the deadline has lapsed, it is automatically passed on to the next level in the hierarchy through email and SMS.

In March 2015, in order to expand the coverage of its grievance redressal system, BMC launched My City My Pride, a mobile application for addressing complaints related to solid waste and sanitation services. The scope of the application was later expanded to include the registration of complaints pertaining to the sewerage system, water problems and electricity issues. The application has been designed by CSM Technologies and can  be downloaded from BMC’s website or from Google Play or iOS stores.

After installing the application, citizens are required to log in using either their Facebook profiles or registered mobile numbers. Complaints can be registered by accessing the “post complaint” link. The page further provides the option of choosing the category under which the issue falls. There are four main heads: solid waste management, street lights, sewage and water supply, and miscellaneous. These are further divided into 25 subcategories.

The complainant is required to give a detailed description of the problems, as well as location and the nearest landmark. The application permits the registration of problems in a citizen’s residential area as well as the recording of issues they could be facing in other areas. The complainant can also post a photograph depicting the issue along with a detailed description. The grievance is automatically transferred to the concerned department and, if necessary, further to the next level in the hierarchy.

The complainant can use the unique ticket number to track the complaint status. For this purpose, the mobile application has a “check status” tab.

In order to ensure greater accountability, the application also provides the status of complaints registered in other areas. After the problem is resolved, the consumer is provided with the details of the concerned official or engineer who has handled the complaint, along with a photograph showing that the issue has been resolved. The civic agency has also launched a dedicated grievance redressal application for BMC officials, BMC M-office, which assists the authority in complaint resolution. It also allows officials to check the status of any pending complaints. The two applications are linked so that every time a complaint is registered, officials are told about the same through M-office in real time. The coexistence of these applications allows for faster communication, and the effective and timely redressal of complaints.

The successful adoption of IT and social media has made officials more accountable and led to greater transparency in operations. BMC’s efforts are yielding the desired results, as has been evident from the responses received on various platforms.

Consumers are using the My City My Pride application as well as BMC Sampark, Facebook, WhatsApp and Twitter to register and track complaints related to civic services. BMC’s initiatives for the online resolution of consumer complaints have been honoured with the Skoch Water Award, 2015.

In the near future, these measures are expected to significantly improve operational efficiency and service delivery. Their successful implementation will also set an example for other local bodies to implement similar initiatives. 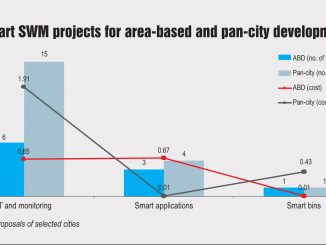 June 2017
Urban local bodies (ULBs) around the country are warming up to the idea of deploying technology-based solutions to manage their [...]
More